It’s not really a secret that if there’s an archer in any form of media, they’re likely to become my favorite character. I’m not really sure why or how this came to be, it’s just the way of the world.

And when an archer pops up in a book, show, movie, or video game, it’s not a matter of if they’ll become a favorite, it just comes down to where they fall on the list. So, here’s a rundown of my top ten favorite archers across all possible forms of media.

Here’s the thing: I never expected to like Teen Wolf. A friend of mine convinced us to give it a try by signing a pact and bribing us with Hiddles and food. And it worked. Anyway, that’s another post for another day, this is all about ALLISON. I knew I was going to love her from the moment she announced she was into archery, but she was also such a kickass female character that it was impossible not to like her.

Allison could take down a  werewolf with her bow and arrow, then turn right around and kick the crap out of whatever new otherworldly thing that popped up in Beacon Hills that week. It’s a thing of beauty.

9. Susan Pevensie, The Chronicles of Narnia

Susan is typically remembered as the Pevensie sibling that turned her back on Narnia and all of it’s magic, and I think a lot of people forget that she was a rather skilled archer. Susan is gifted a bow and arrows by Father Christmas during the events of The Lion, the Witch and the Wardrobe which later aid her in fighting the White Witch. Susan’s archery skills were a thing of legend, long after she had returned to Earth, and at the beginning of Prince Caspian she lives up to the legend this by defeating Trumpkin the dwarf in a friendly competition. 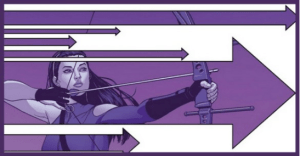 I was first introduced to Katey-Kate in Matt Fraction’s Hawkeye comic when it debuted in 2012. Kate is a spoiled, rich, Manhattan Princess who uses various forms of combat fighting and self-defense in order to deal with the lingering feeling of helplessness left over from an assault. She’s an incredibly skilled archer and together with Clint Barton she forms one half Team Hawkguy.

7.  Merida of the clan Dunbroch, Brave

Merida is Pixar’s first main female character and they absolutely nailed it. She’s the daughter of a Clan Chieftain, so she’s supposed to marry in order to cement an alliance with another clan. However, Merida’s mindset, in the words of her father, is “I don’t want to get married, I want to stay single and let my hair flow in the wind as I ride through the glen firing arrows into the sunset.” I mean, that sounds like a pretty sweet life to me.

It helps that she’s quite the shot with a bow. She puts all her would be suitors to shame, Robin Hood style, in a competition to see who will win her hand.

6.  Legolas Greenleaf, Lord of The Rings

Would a list about archers be complete without Legolas? I think not. His skills with a bow combined with his way above average elf eyesight, make him one hell of a shot. He proudly represents the Elves in the Fellowship and becomes an even better shot than before after receiving a new longbow from Galadriel. And while he kills more than his fair share of Orcs, it’s the building of his friendship that Gimli that really endeared me to him in the end.

Katniss won a piece of my heart (as she did so many others) when she volunteered to take her younger sister’s place in The Hunger Games. Yet, she cemented that place with her skills as an archer. She’s deadly with a bow and watching her use her skills to avenge the deaths of those she loves and protects is thrilling. And she gets some pretty sweet trick arrows to help her along the way courtesy of Gale and Beetee.

Oh, it’s also pretty cool that she uses this skill to keep her family from starving. You know, no big deal, right?

4. Link, The Legend of Zelda

Link might actually be the second archer I latched on to as I played Legends of Zelda for the NES back in the dark ages of in-home console gaming. Link has the potential to be an excellent archer,but it really depends on how skilled the person holding the controller is. And after years of honing my talent, I’m pretty darn good at shooting the digital bow and arrow. This is actually the closest I have ever gotten to actually archery

And while I started on the NES, The Legend of Zelda: Ocarina of Time will forever be where my gamer heart lies.

Not too long after I discovered Hawkeye while reading Marvel comics I learned that DC had a similar counterpart that (let’s be honest) looked a bit like Robin Hood. Well obviously I read up on Oliver Queen and determined that the Green Arrow could be second on my list of favorite DC heroes (Let’s be real, no one is dethroning Batgirl on that list).

I have a real soft spot for Stephen Amell’s take on Oliver Queen and Arrow is one of the only shows I make time to watch as it airs each week. This Oliver Queen is incredibly skilled with a bow, but doesn’t possess any super powers, he’s fiercely independent, but learning to work with a team, and is incredibly protective of those he considers family.

Does this one even need an explanation? Clint Barton has worn a few different masks over his years as a super hero, even donning Cap’s suit and shield for bit, but Hawkeye suits him the best. I mean, he has no actual superpowers, he’s just THAT good with a bow and arrow. He can aim without looking, he does complicated physics equations in his head in order to make the shot, and he is snarky as all hell.  Hawkeye has always been my favorite Avenger and I was so, so pleased with Jeremy Renner’s performance in this role.

The only reason Clint doesn’t rank as number one is because I went with longevity as the deciding factor. Which brings us to…

Let’s be clear here. When I’m talking about Robin Hood I’m (almost) always referring to the Disney version from the 70s. Yes, the one with the foxes. This was my favorite movie as a child and introduced me to the beauty of archery. When I was 3 and all the little girls were dressing up as Brides, Princesses, and Mermaids for Halloween, I was donning a green tunic, a hat with a feather in it, and little green booties in order to become Robin Hood. I carried my suction cup bow and arrow proudly and used it to shoot anyone who made fun of my “boy” costume.

Well, there you have it: my exhaustive list of favorite archers. What is you go to favorite characters? Assassins? Nerds? The asshole with a heart of gold? Genius, billionaire, playboy philanthropists? Share your go-to characters in the comments!

And while you’re doing that, I’ll just be over here researching where I can take archery lessons in Nashville.

3 thoughts on “Archers, Always On Target”