Over the years there have been quite a few movies and tv shows that feature women kicking ass in different ways. Some of them use their fists, like Buffy the Vampire Slayer or Sydney Bristow; others use bows and arrows, like Susan Pevensie and Merida. I have a soft spot for the ones who carry swords. Here’s a handful of my favorites, in no particular order.

Eowyn of Rohan, Lord of the Rings

Eowyn is probably the reason for my obsession with sword-wielding women. She is the niece of Theoden, she refuses to stay back in Rohan when there is use for her skills in the war, and it is she that takes down the Witch King of Angmar. It’s one of the best moments in Return of the King, and it’s all hers.

Cassandra is the daughter of nobles, part of a long history of dragon-hunting, and yet she turned away from her family tradition to become the right hand of the Divine. She is a Seeker, first introduced in Dragon Age 2 and made a full companion in Dragon Age: Inquisition. She’s very well-rounded, and firm in her opinions. She’s one of the best-written and compelling characters in the Dragon Age universe, and she’s one hell of a tank.

I mean, you’ve all seen this movie, right? Uma Thurman kicks everyone’s ass in this movie with a katana in what is a pure distillation of sheer rage. She’s the embodiment of what it means to walk away from a Michael Bay style explosion without looking away. She is badass.

Aveline’s an interesting character, in that she’s one of the few companions you get in a video game that doesn’t just stand around waiting for you to tell her what to do. She goes and joins the city guard and ultimately becomes the Guard-Captain of Kirkwall, making her own name for herself while Hawke becomes the Champion of Kirkwall. She is strong-willed, confident, and a stalwart warrior.

Alanna of Trebond, Song of the Lioness 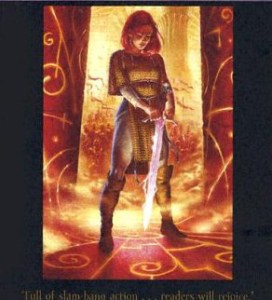 Alanna begins her tale masquerading as “Alan,” as in these books, girls cannot train to be knights. She trades places with her twin brother Thom in order to learn to fight, and she does exceptionally well for herself. She grows up to become formidable with a sword. Her quests take her all over Tortall and she battles sorcerers and warriors. The series spans the course of her teen years, and you get to watch her grow up as you read. She is a strong, intelligent, determined young woman, and the sword she wields as a knight is merely one of her many accomplishments.

Brienne of Tarth, A Song of Ice and Fire

Brienne is the daughter of a noble from Tarth, known as the Sapphire Island. She’s tall, unconventional in her appearance, and well-trained in swordfighting. You first meet her as one of Renly’s Kingsguard, but as the series progresses she finds her way in the service of Catelyn Stark, befriended by Jaime Lannister, and more. She has proven herself in battle time and time again and is a favorite among fans of both the show and the book.

“But wait, Mako doesn’t wield a sword,” you might be thinking. But you are wrong. The retractable chain swords installed during the restoration of Gipsy Danger were Mako’s idea, and she is the one who pulls it out when they are at a loss for choices against Otachi, the flying category IV Kaiju that dragged Gipsy Danger into the atmosphere. Mako’s skill in battle is proven well before she is allowed to pilot the Jaeger with Raleigh Beckett, as she holds her own against him in hand-to-hand combat. But that moment with the sword is one of the movie’s great badass reveals, and as the one who pulls it off, Mako gets to be on this list.

Elizabeth Swann, Pirates of the Caribbean

Elizabeth Swann starts out as a prim and proper lady, wearing corsets and lace but never feeling like she fits in. However, her story quickly veers into awesome territory as she is wrapped up in a pirate’s plot, trading her skirts for breeches. She goes from being captured and held as bait to being the King of Pirates in the span of three movies. Not shabby, all things considered. And by the end, she’s wielding a swords with the best of them, having given herself wholeheartedly to a life of piracy.