Disclaimer: This post is overflowing with spoilers for Harry Potter, Arrow, Star Wars EU, The West Wing, Firefly, The Hunger Games, and Battlestar Galactica. Proceed at your own risk.

Death is a part of life. Everyone who lives, has to eventually die. Which, when you think about it, really kind of sucks. Sure, it makes life worth living, because if you know it’s going to end someday, you want to make the absolute most of out the days you have on this Earth. But death is final, it’s eternal, it’s forever.

Once someone is gone, they’re gone.This is true in real life as well as in movies, books, and television. (Comic books are a whole other story, but that’s a topic for another post.) Even though the characters are fictional, their deaths still feel incredibly real and can often have the same emotional impact as a real life death. It’s similar to finding out that a beloved celebrity has passed away; you never knew them personally, but their work touched your life, and you feel the sting of their passing keenly.

When we immerse ourselves in media, the characters become living, breathing entities to us. They feel real in a way that’s often difficult to explain. We form bonds with these characters. They become our friends. They represent a part of us. And then they sometimes they die. Their death often creates a hole that can’t be easily filled. It causes pain that we may never overcome.

Often I understand the reasoning behind a character’s death. It furthers the plot, it spurs another character to action, one character sacrifices themselves for another. I don’t love these deaths, but I understand them and I acknowledge them.

But sometimes I simply outright refuse to acknowledge the death of a character. To absolutely ignore to the fact that they’re gone and never coming back. Instead I cling to hope that they were revived offscreen or off page and are living a happy life on a white sandy beach somewhere in the Bahamas.

So, here’s my list of the character deaths I’m still not over. The ones I refuse to admit happened. The ones that still live on in my heart (and fanfiction).

There are plenty of deaths in the Harry Potter books. It starts with the Potters and it just goes downhill from there. They all hurt, and most of them had me at least tearing up (who am I kidding, I full on sobbed when Sirius and Dobby died). But none of them hit me quite as hard as Fred Weasley. It was a combination of both my love for the character and the suddenness of his death. One minute he was there, laughing and joking, and the next he was buried in a pile of rubble. When it happened I stared at my book in shock, refusing to turn the page because I wasn’t ready to admit that it was real.

No. Just no. This didn’t happen. I don’t even want to talk about it. * plugs ears and hums as distraction *

Oh Tommy, you were with us for such a short span of time, but in that very first season of Arrow you managed to worm your way into my heart and carve out a space for yourself. He disagreed with Oliver’s choice to become the Vigilante, yet he never even thought to betray his friend. Tommy was the hero of that first season. He was the one who saved the girl and sacrificed himself. He was the heart of the show and when the writers made the (understandably logical) decision to kill him off, I was heartbroken. The only silver lining is that Arrow is a show of flashbacks, so while Tommy may be dead in the present, we still get to see his smiling face grace on the tv screen when the past calls for it.

This was a death that I absolutely did not see coming and it was a completely unwelcome surprise in the season 3 premiere. Sara was killed off to further Laurel’s character and help transform her into the Black Canary. And just, no. That is not okay. Sara didn’t need to die for this to happen; she had already handed off the mantle and given her blessing in the season 2 finale. Killing her this was lazy writing plain and simple. I’m so tired of seeing women fridged like this. Sara deserved better.

Leo’s death hurt deeply in a way that the others didn’t, because it was real. Leo’s onscreen death was written into the show following the real life death of John Spencer. No one was prepared for his death, there was no lead up to it and as a result it was abrupt, raw, and utterly painful. It hurt watching the episode featuring his funeral because the cast wasn’t acting, they were mourning the loss of a dear friend live and in front of the camera. It’s a hard death to accept, and I prefer to exist in the happy bubble before mid-season 7 and pretend that Leo is still alive and well.

The blunt, outspoken women who served as gatekeeper, secretary, and big sister to President Bartlet was a fan favorite on The West Wing. She was endearing and kind, and who didn’t share in her excitement when she announced that she was buying her first brand new car? Then, just moments later, that excitement turned to utter sorrow when in a cruel twist of fate she was killed off in a car accident. Well, I don’t like it. I think she simply had enough of the White House Life and skipped town in her new car and she’s happily cruising up the PCH, windows down, and the wind blowing through her hair.

By the time Serenity hit theaters, I was prepared for a character death. I was ready and waiting to see which of the crew would suffer the ultimate fate. After all, this is Joss Whedon we are talking about. The crowned King of Killing Off Beloved Characters. I just wasn’t ready for it to be Wash. At that point in the movie we had already lost Shepherd Book (and Mr. Universe with his weird fembot thing), so I was confident that we’d filled the quota for major character death. But oh, how wrong I was. Wash’s death is sudden and slams into the audience with no regard for their feelings or their hearts. It left me in denial and to this day I refuse to acknowledge the last bit of the movie, because that means that I have to say he’s really dead.

Angel had its ups and it’s downs, and it absolutely made its fair share of missteps (I’m looking at you writers, for your poor treatment of Cordelia Chase). But one of the things I cannot forgive the show for is the death of Fred Burkle. Fred was so full of life and she brought levity to a show that was practically buried in pain. She was a bright light in the dark, but they snuffed it out. And then, almost as an apology in the form of a slap in the face, they gave us Illyria. So Fred was there, but she wasn’t and it was awful. None for you writers, none for you. 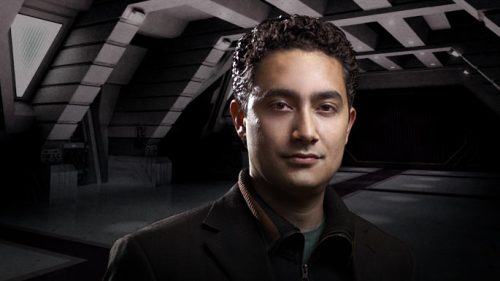 Gaeta became one of my favorite characters the moment he stepped onscreen in the miniseries. He was so young, but so capable and so intelligent, that it was easy to see why he was a trusted senior officer on the deck of Galactica. Yet, as the series went on, the writers clearly had no idea what to do with Gaeta and the amazing character he’d been at the beginning slipped further and further away. And while his death was almost a relief, as it ended the suffering I felt watching the character assassination unfold, I’m still unable to forgive the writers for what they did. I refuse to admit that Gaeta didn’t also make it to Earth and go off to build his own house and live in peaceful solitude for the rest of his days.

Finnick. Oh, Finnick. I was sure I wasn’t going to like you. I was positive that you would end up being the annoying cocky asshole that I grumbled about each time you appeared on the page. But you weren’t. You were a cocky asshole at times, sure, but you were also so genuinely good and you cared so much about people and damn your good heart being what got you killed. In my version of the story, Finnick bravely battles the mutant sewer creatures and emerges, victorious, to join Katniss in her final push against the Capitol. And then he and Annie have all of the babies and live happily ever after the end.