It’s May 4th and you know what that means? It’s Star Wars Day! I know, I know, we promised you two full weeks of Marvel goodness as a leadup to Civil War, and I bet you’re wondering where Star Wars fits into all of that.

As I’m sure you know, over the past few years Disney acquire both Marvel and Lucasfilms, which means The Mouse owns the rights to all of the Avengers, Han, Luke, Leia, and more. As part of that merger, Marvel began publishing a new run of Star Wars comics (they were previously published by Dark Horse). This new run of comics is really good and it fills in some of the gaps between the original trilogy and the current trilogy with Shattered Empire , as well as providing side stories and additional adventures for new and old characters alike with miniseries focusing on Princess Leia, Darth Vader, and Poe Dameron (just to name a few).

Now that these two properties are (re)united under a single banner, it’s inevitable that talk will turn to potential crossovers and how these two universes could be mashed up. Stan Lee hinted at it earlier this year (but was probably just wishful thinking on his part), so I’ve come up with a few ideas for him that hopefully he will never, ever get to use. And if you have your own crossover ideas, please share them in the comments!

Han and Chewie meet the Guardians

It’s almost inevitable given their history or causing trouble and pissing people off that Han and Chewie would eventually run afoul of the Ravagers. Han would call on his old buddy Star Lord to help him out of a jam, and try to talk some sense into Yondu. Of course, once everything is resolved they head to Mos Eisley for drinks.

Tony’s engineering brain would go into absolute overdrive when faced with the likes of C-3PO, R2-D2, and BB-8, and with good reason. He’d have them in his workshop in a heartbeat, talking to them, studying them, and eventually upgrading them. When he’s done with them Threepio will be far more than a protocol droid (rocket launchers for arms anyone?), Artoo will practically be a mini, rolling Iron Man suit, and BB-8… well, he’ll just be full of surprises.

Mara Jade is a graduate of the Red Room

As a young child Mara was recruited alongside Natasha for the Red Room’s Black Widow program. She’s one of their most gifted students, with her force abilities allowing her to progress through the training quicker than any of the other girls her age. Upon graduation she is assigned to one of the galaxy’s most elite positions, the Emperor’s Hand.

While on a hunt across the galaxy for her Flerken cat, Captain Marvel stumbles across the moon of Endor. When the Ewoks see her fly through the sky and land in their village, she’s immediately hailed as a goddess. She accepts this title graciously and promises to visit often. 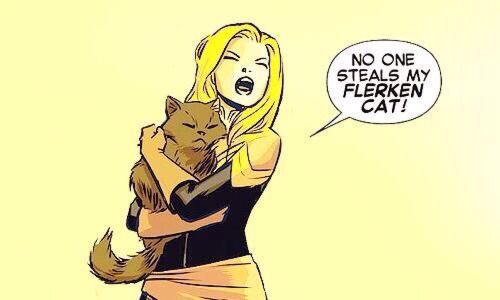 These two have similarly depressing backgrounds (orphaned at a young age, raised by an elderly aunt and uncle) and it makes sense that they’d both eventually seek out therapy to help cope. And as an added bonus, while enjoying stale donuts and bad coffee they meet someone who can actually relate! (And they both bond over having a thing for redheads.)

While on a diplomatic mission to try and convince one of the outer plans to join the New Republic, Leia is in the middle of a crucial discussion when Deadpool pops up. In less than a minute flat he’s offended her, angered the country’s head of state, hit on his wife, and pissed off the captain of the military. Without missing a beat, Leia stuns him and casually steps over the body to resume the talks. When he wakes up later, handcuffed and in the brig of her ship, he has hearts in his eyes and can’t stop professing his undying love for her. 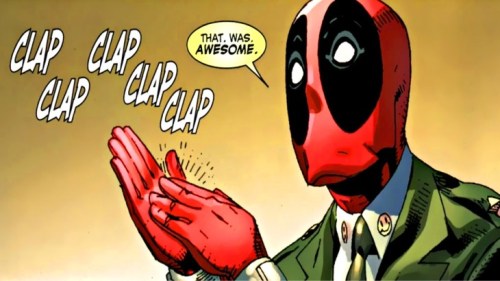 Ronan versus the Emperor

Ronan’s tear through the galaxy comes to an end when he sets his sight on the Imperial Capital of Coruscant. The power of his Kree army is nothing against the firepower of an operational death star and before he can raise his weapon, his ship is obliterated into dust and debris.