WARNING: Spoilers for Captain America: Civil War, Agent Carter, Ant-Man, and Avengers: Age of Ultron ahead. Proceed at your own risk.

Like many of you, we saw Captain America: Civil War on opening weekend, and haven’t stopped discussing it since. While the internet is abuzz with speculation about the big questions raised by Civil War’s somewhat open ending (where is Natasha? Are the inhabitants of the Raft going to be the basis for the Secret Avengers now? Is Bucky going to show up in Black Panther?), today we’re going to focus on the small ones. These are the questions that may never be answered for certain (although we hope at least a few of them will be someday), but are certainly fun to speculate about.

While the comics have never clarified the connection between these two characters (if there even is one), Marvel tends to be pretty deliberate about the characters they use in their movies and the names they drop. Bringing back General Ross (whose only appearance so far in the MCU has been in The Incredible Hulk back in 2008) in the same movie where they introduce Everett K. Ross (best known from the Black Panther comics) feels like more than a coincidence, and we won’t be surprised at all if they turn out to be connected in some way.

2)  Did a young Bucky Barnes attempt to flirt with Dottie Underwood?

Fans of Agent Carter may have perked up in the theater when, in a nostalgic exchange between Steve and Bucky, Steve mentioned Bucky spending “three whole dollars” at a fair in an attempt to impress a pretty redhead.

“What was her name?” Bucky asked, a smile on his face.

“Dolores,” Steve said, “But you called her Dot.”

On Agent Carter, Dottie Underwood was a Soviet assassin and a product of the Red Room program, a precursor to the Black Widow program. While Dottie’s hair was never exactly red, we find it hard to believe Marvel would just casually drop in a Dot that interacted with Steve and Bucky in the 1940’s and have it not be a nod to Peggy Carter’s neighbor-turned-nemesis-turned-frenemy. And while we don’t know if this encounter between Bucky and “Dot” was entirely coincidental (probably) or part of one of Dottie’s nefarious schemes (probably not, but it would be interesting), one thing’s for sure: we want to see the AU where Steve, Peggy, Bucky, and Dot go on a double date.

3) What did Clint say to Scott to convince him to join Team Cap?

The final scene in Ant-Man is Scott getting word that Sam Wilson is looking for him, which happens at around the halfway point of Civil War. What this means is that the majority of Ant-Man is happening at the same time as the first half of Civil War, and that when Clint and Wanda go to recruit Scott Lang, not much time has passed for Scott since his sub-atomic victory over Yellowjacket.

The problem? Scott’s motivation throughout Ant-Man was to regain custody of his daughter, Cassie. So what did Clint/Wanda/Sam say to him that convinced him that flying to Germany to join Steve’s rogue op was in his best interest? The simplest explanation seems to be that Sam left out a few details during his recruitment, and Scott was under the impression that joining the Avengers might actually help his case for Cassie. Then, once he arrives in Germany, there’s definitely a degree of Captain America fanboying going on, which may explain why Scott goes along with the plan even after he knows they’re “outside the law”… but it would still be interesting to know what exactly was going on in Scott’s head. 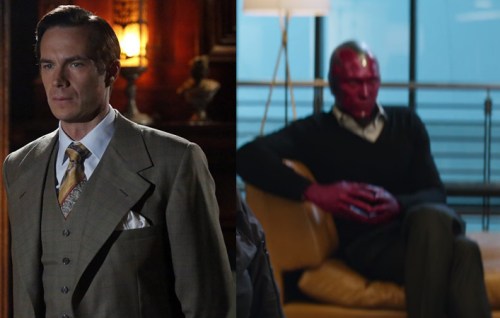 When Vision was created in Age of Ultron, he was programmed using JARVIS-based codes. As anyone who has watched Agent Carter knows, Tony’s cyber-assistant JARVIS is based on a real-life human from his past: his father’s assistant, Edwin Jarvis.

Now, we’ve already seen in Age of Ultron that Vision is a copycat when it comes to fashion. And while he’s not sporting a 3-piece ‘40s-style suit, it’s easy to imagine that if Edwin Jarvis were alive today, his fashion choices would be very similar to Vision’s in Civil War. Could it be that somewhere deep down in his programming, Vision is channeling the man behind the code? We certainly hope so.

5) Who are Sharon Carter’s parents?

Steve may have been surprised when Sharon revealed her connection to “Aunt Peggy” at Peggy Carter’s funeral, but we weren’t. In the comics, it’s well established that Peggy is Sharon’s aunt. However, in the MCU, it’s a bit trickier. We’ve learned from Agent Carter that Peggy’s brother Michael died during World War II, and that his death is what inspired Peggy to go be a field agent. However, it’s heavily implied in Agent Carter that Michael is single, and no children are ever mentioned. Neither of them mentions another sibling, either. While it’s possible that there was a (likely much younger, given Sharon’s age) third Carter sibling hiding behind the scenes that no one ever mentions, or that Michael had a child, we’re open to the possibility that “Aunt” was more of an honorary title, and their actual relation is a bit more distant.

6) When exactly did Natasha switch sides?

During a pivotal moment in the airport fight scene, Natasha cuts off Bucky and Steve’s exit — or so it seems, right up until she shoots and stuns T’Challa, who was standing right behind them, and who was (supposedly) on her team. After Bucky and Steve escape, Natasha shrugs. “I said I’d help you find him, not catch him,” she says about her promise to T’Challa. “There’s a difference.”

Earlier in the fight, Natasha and Hawkeye trade blows and quips, right up until Wanda blasts Natasha across the runway. “You were pulling your punches,” Wanda says in explanation. And it’s true — neither one of them was giving that fight their all.

So was Natasha as solidly Team Iron Man as she would’ve had us believe, or did she switch over fairly early in the fight and simply wait for the opportune moment to make her move? Only she knows, but we have to admit, when she came over to join Team Cap, we cheered.

7) Who texts Steve to tell him Peggy has died?

Early on, Steve walks out on a debate about the Sokovia Accords because he receives a text message that “She is gone. In her sleep.” There’s no name attached to the text, and it’s clear based on Steve’s reaction at the funeral that he had no idea of the relation between Sharon and Peggy. The other people who were close to Steve were in the room with him, so who was with Peggy, waiting with Steve’s number in their phone? One simple explanation is that Steve has visited her enough while in hospice that he’s gotten to know her family, which would also explain why he’s a pallbearer at her funeral.

Now if you’ll excuse us, we’ll just be over here weeping softly at the mental image of Steve sitting at Peggy’s bedside, reading stories to her grandkids.

8) Do Natasha and Bucky have a history?

During the fight scene in Berlin after Bucky is triggered by Zemo, Bucky pins Natasha down by the throat and she chokes out, “You could at least recognize me.”

This is an interesting line, because as far as we know, in the movies, Natasha and Bucky don’t know each other. While Natasha was by Steve’s side for most of The Winter Soldier, her only interactions with Bucky were in fight scenes. In Civil War, they mention that they’ve been looking for him for two years and haven’t gotten anywhere, and when Bucky is captured, it’s War Machine and Black Panther that help bring him in, not Natasha.

So why would Natasha expect Bucky to recognize her, especially in his triggered state? One explanation is that she does meet him sometime after he’s captured, although that doesn’t seem highly likely, considering the kind of security around him. Another is that she actually met him before the events of Winter Soldier, which is why she is able to tell Steve who he is after he attacks Fury. This could be a nod to the comics, where Natasha and Bucky not only have a shared professional history, but were also romantically linked. We’ll probably never get the full story of how the Black Widow and the Winter Soldier know each other in the MCU, but one thing’s for certain: there’s more to both of them than meets the eye.

ETA: Some have brought up that Natasha says in Winter Soldier that Bucky shot her in the stomach, and that is why she expects him to recognize her. But to us, the way she delivers the line in Civil War seems to imply a more personal connection, not simply that he should recognize a past mark. If anything, if their only connection was a failed assassination attempt, drawing attention to it at this moment might only serve to reinforce Bucky’s determination to kill her. So while we absolutely allow for the possibility that their connection is somehow tied into that pre-Winter Soldier encounter, we are firm in our belief that there is a lot more to the story.

9) Who did Peggy Carter marry?

We get why the MCU didn’t answer this question in Civil War (and probably never will). The bittersweet star-crossed love story between Steve and Peggy was one for the ages (literally), and even though we know that Peggy eventually married and had children, it may make it a little too real for the fandom if we’re actually confronted by Peggy’s flesh-and-blood husband. However, especially for those of us who have watched all of Agent Carter, we have a vested interest in knowing who she winds up with. Civil War had a prime opportunity to answer that question during Peggy’s funeral, but chose to sidestep it instead. The most likely candidate is Daniel Sousa, whom we last saw locking lips with Peggy in the Agent Carter season 2 finale, but if not him, at least we know that the man she picks is worthy. Because, as we’re all aware, Peggy knows her value.

10) Did Hawkeye come out of retirement not out of loyalty to Cap, but to Quicksilver?

Okay this isn’t technically a question because we all know the answer is yes. Hawkeye sticks to his guns about his retirement twice before he ultimately joins the fight, and when he does, it’s to rescue Wanda from her imprisonment in the Avengers compound. After that, Hawkeye sticks close by Wanda’s side, and at one point mentions that he’s there to repay a debt. It’s pretty evident that Pietro’s sacrifice is still front and center in Clint’s thoughts, and that he believes he owes Wanda for her brother’s life. There wasn’t much mention of Quicksilver made in Civil War, but Hawkeye’s presence speaks volumes about his importance.